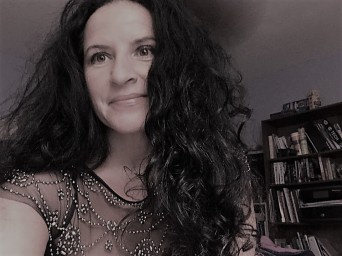 Tamara Miles teaches English, Humanities, and College Skills at Orangeburg-Calhoun Technical College in South Carolina. She is also the Presidential Scholars Program Coordinator. Her poetry has appeared in a variety of publications including Feminine Collective; Fall Lines; Pantheon; Tishman Review; Animal; Obra/Artifact; Rush; Apricity; Snapdragon; Cenacle; RiverSedge; and Oyster River Pages. She was a 2016 contributor at the Sewanee Writers’ Conference and a resident at Rivendell Writers Colony in August, 2017. She hosts an audio poetry journal/radio show at SpiritPlantsRadio.com called “Where the Most Light Falls.”

You can visit her Facebook page called A Voice for Poets

With her poem “How to Stop Your Dog from Howling” Tamara won the Third Prize in the First International WeArtFriends Poetry Tournament in 2018.

How to Stop Your Dog from Howling

Love him the way he knows,
not from the hallway where he sighs
while you make your daily habitations
and gesticulations before a mirror,
but round and cheerfully green.

You can read the winning poem as well as another 4 of Tamara’s poems on Amazon.

The long-awaited “Anthology of Winning Poems” from the 2018 WeArtFriends poetry competition is already available on Amazon!